On the issue of rule of law in Poland, the Czech Republic will be an impartial arbiter [INTERVIEW] 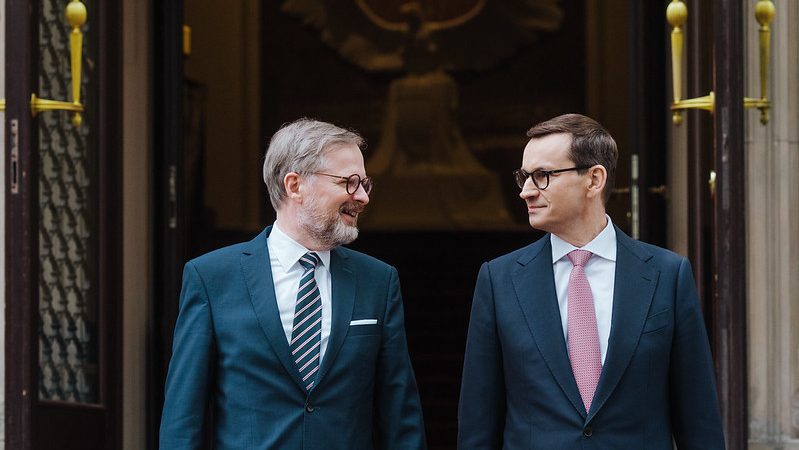 There are important differences between Poland and Hungary when it comes to the state of the rule of law. We hope to make progress on this issue during our Presidency of the Council of the EU, Marek Havrda, Deputy Minister for European Affairs in the government of Petr Fiala, stresses in an interview with EURACTIV.pl

Karolina Zbytniewska, EURACTIV.pl: Among the priorities of the Czech presidency in the EU Council that starts in July the Czech officials mention European democracy, values, and media freedom. Does it mean that Czechia will insist on Poland improving the rule of law situation?

Marek Havrda: Indeed, the resilience of EU democratic institutions is going to be one of our presidency’s priorities. We will try to address different angles of the problem, with a particular focus on the media.

We expect a proposal from the Commission, the European Media Freedom Act. We would like to focus on that because we feel this is a very important area. In case a significant part of the media is controlled by politicians, we know that it has an important impact on the functioning of the whole democratic system. 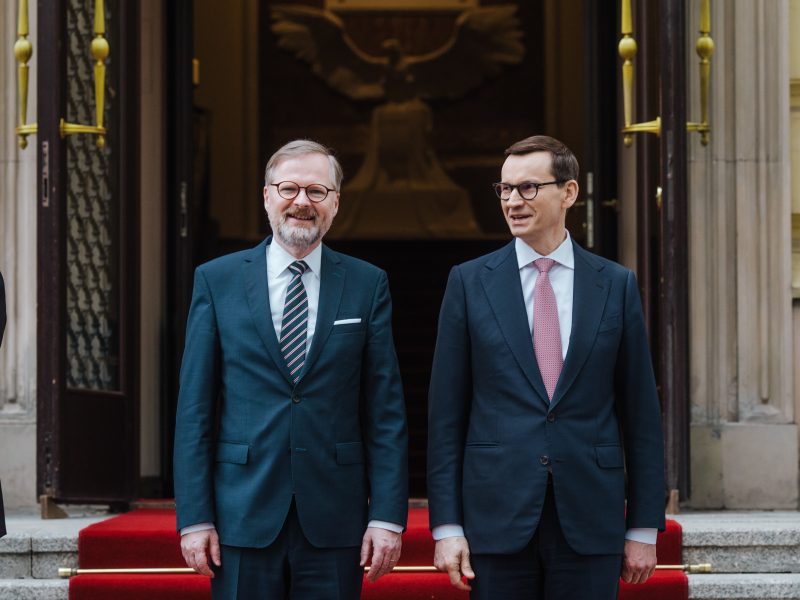 You are now looking beyond the European Union?

We have to look both externally but also internally to be able to act on the rule of law.

Based on the current discussion in the General Affair Council, I feel there is an important difference between Poland and Hungary, and we hope we can make some progress on this discussion, but of course it depends.

In Hungary, there seems to be a systemic problem in terms of public finance abuse and insufficient measures to prevent fraud and corruption. In Poland, the situation is different. And we hope there might be some important changes in Poland in the coming weeks. Hopefully, the changes will be substantial enough for us not to need to have a discussion as it was so far carried out.

In late April, PM Petr Fiala said before his visit to Poland that “there are more important things to do” than fighting for rule of law conditionality. But several days later he told “Rzeczpospolita” that Prague “wants to have nothing to do with the extreme right”, commenting on Polish officials’ meetings with Marine Le Pen and Spanish Vox party. The two statements sound oxymoronic.

Of course, one of the questions on the table is Russian aggression against Ukraine and its consequences for our overall security, including economic security, energy security, but also food security and the security of supply chains are at stake. Clearly those are more important things to be discussed.

Security comes first and that’s a prerequisite for our discussion. This is clear and relevant both to Poland and to Hungary. We need to address both countries.

But when it comes to the rule of law as such, there are more dimensions, and this might be just one of them. We must look into a larger scope of the abilities of the Member States to implement the rule of law, and I have in mind not only Poland and Hungary, but all Member States, including the Czech Republic.

You mentioned security. At the beginning of the COVID-19 pandemic, some countries, like Hungary, were implementing measures that were considered undemocratic. Those countries were then criticized for using the argument of security as a pretext to undermine democracy. I would not agree that the security of the EU borders weakens urgency of care for democratic values within the EU.

Poland clearly shows by how it is dealing with the refugees from Ukraine that it respects the EU values. It is a good example of putting the values into practice.

As you said, on the grounds of internal security there might be some rule of law abuse, as it was in the case of the COVID-19 pandemic in some countries. This needs to be monitored and scrutinized whenever abuse happens. It has to be examined, questioned and discussed, without a shadow of a doubt.

In Czechia, the presidential elections are coming and Andrej Babiš is already campaigning in smaller municipalities. Don’t you think he should first be held to account for the financial machinations he is suspected to have committed before being allowed to run for president?

The judiciary is independent from the executive branch of power. So, I hope that the judiciary will act in an independent manner, and we’ll find the right approach to the case involving the former prime minister.

Babiš pursues one of the typical populist agendas: he is playing on the citizens’ resentments and triggers negative attitudes towards Ukrainian refugees that – according to him – receive unfair benefits from the state.

We are surrounded by various dangers. Many are the consequences of the Russian aggression against Ukraine, such as the fuel crisis or the refugee debate. Of course, some politicians are going to use and abuse those topics. And we can expect this will be happening not only by Andrej Babiš but from others as well.

I hear about his billboard campaigns. He argues that when he was prime minister everything was cheaper. So that might be a good argument for people that cannot make ends meet.

Yes, but what needs to be mentioned is that his fiscal policy was clearly very generous, and we now deal with the debt that has increased significantly over the last years partially because of his policy. The debt is also connected to the COVID-19 pandemic but the Babiš’s policy added to the level of inflation we deal with.

The EU presidency is coming. What are the issues of your major concern?

We have to deal with the Russian aggression while addressing the two major packages. One is related to climate change and the Green Deal. Of course it has direct relation with energy security that will be one the priorities of the presidency. The second group concerns digital transition, including cyber security.

Yes, a very Pirate agenda. Pirates are in the government and we have Deputy Prime Minister with the digitalisation portfolio (Ivan Bartoš) and of course we will use this opportunity to work on very concrete files. Why is this important? It is because it gives us an opportunity to strengthen the digital dimension of the internal market. One of the important files is the Data Act, and also European electronic identity that would enable a lot of new e-services to be accessible across the Union. We are also looking deeper into the future, for example, in the artificial intelligence act. But maybe let’s get back to the priorities.

Exactly, what are the priorities then?

Ukraine is obviously the key topic. We need to make sure we manage the inflow of the refugees and that the infrastructure and the services in the receiving countries like Poland or the Czech Republic can handle the huge number of people coming.

You mean some general migration package or a special one relating to the situation in Ukraine?

A package concerning the consequences of the events in Ukraine. Of course, that package might also have an impact for the general discussion on migration.

Do you plan to fix the migration gridlock finally?

I do not know if we manage to finish it, but definitely we will work on the file that I mention as well as on the package of files on migration. Hopefully, we will also work on the reconstruction of Ukraine. The EC has already published a number of proposals related to how this could be structured. The reconstruction needs to be led by Ukrainians and managed together with them.

Another important topic is energy security.

We would like to quickly implement several measures which would help us reduce the dependence on Russian fossil fuels. This includes the diversification of supplies from different parts of the world, including the logistics aspects. But the discussion also involves renewables which are very much linked to Fit for 55 package.

Defense capabilities. We have one important document: the Strategic Compass. We would like to work and progress on its implementation. Europe needs defence capabilities, but of course we are not fools. It is crucial that our defence efforts are fully complementary to NATO.

The next two areas are related to resilience: resilience of European economies, and resilience of democratic institutions. Digital transition is included in the one related to the economy, but not only there. The resilience aspect is also involved with the discussion on the supply chains from medicine to food, which might become very important because of the war. The Russian aggression against Ukraine led to the rise of prices, but it also resulted in disrupted supply chains. If you ask me about concrete files, there is a file on semiconductors, so called Chips Act, a very important area for us and we would like to make important progress there.

Finally, we would also like to have a substantial progress on trade, since a part of the resilience is to have good partnerships, including good trade partnerships. Not only with the United States, but with other countries, including New Zealand, Australia, Japan, Korea and other countries in the Pacific region, as well as Latin  American countries.

The Conference of the Future of Europe is ending. Are you going to address it in any way during your EU presidency?

Yes, we will analyse the reports and continue the discussion which has started in the General Affairs Council. Firstly, it is important to get an understanding of what the citizens propose and what could be done in the framework of the already ongoing initiatives, what maybe has already been done in terms of preparation.

Hopefully, there is no complete mismatch between what the European institutions see as important and what the citizens want to be done. Some issues have already been addressed by the EU institutions and this analysis (of what has already been done) needs to come first.

You are related to the Czech Pirate Party. For the Pirates, the Visegrad Group hasn’t ever been a priority. But now you are in the government, where everything changes. How do you perceive the Visegrad Group, especially with Hungary siding with Russia so much?

When it comes to the V4, I think it’s important to go back a little in history. When the V4 started as a format, the joint interest of the three, later four countries was to become again a part of the united Europe. At that time, the V4 project was innovative, and it contributed to the member states’ accession to the EU and NATO. Since then, the Visegrad Group has been providing the grounds for discussion and served for maintaining good relationships between the neighbors, which is of course very important. It’s a flexible structure which allows us to discuss and work on the areas of the common interest. So, in that respect V4 functions as a flexible instrument that benefits all the four countries. 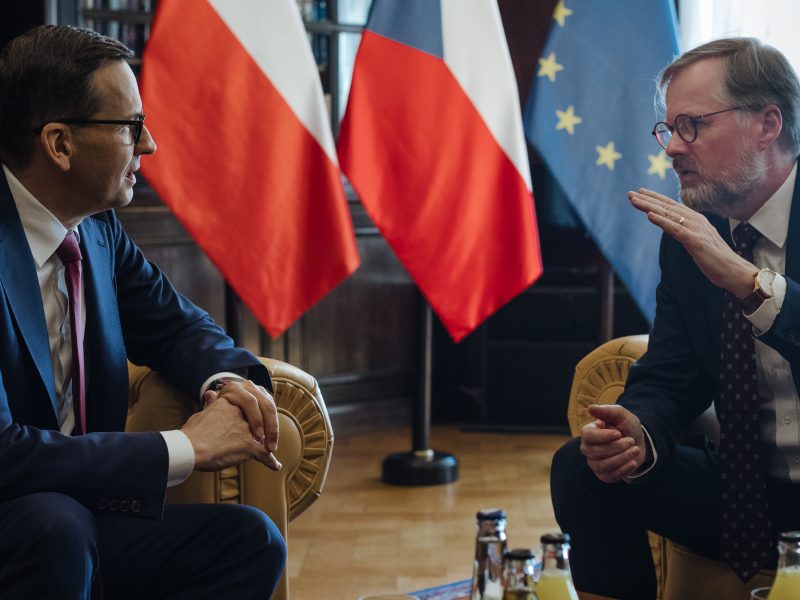