Bartosz Arłukowicz: „Any method is good that leads to the surge in vaccinated population” [INTERVIEW] 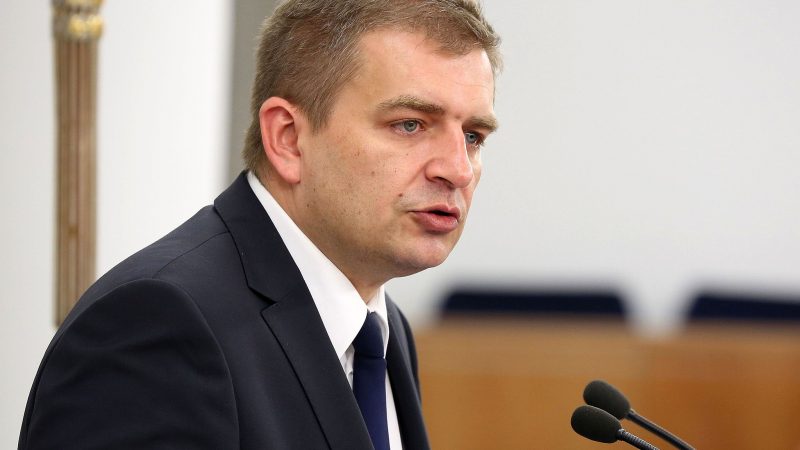 Były minister zdrowia. eurodeputowany Bartosz Arłukowicz / foto via wikimedia commons [The Chancellery of the Senate of the Republic of Poland]

„COVID-19 has shown that civilisational challenges require cooperation. The provisions in the Treaties that leave health issues in the hands of the member states needs to be revised”, says Bartosz Arłukowicz, MEP and former Health Minister.

Karolina Zbytniewska, EURACTIV.pl: More than 70 per cent of the EU adult population has been vaccinated. This means that the EU has managed to achieve its goal set in January. How would you evaluate the vaccination campaign in Europe and its results?

Bartosz Arłukowicz: The COVID-19 pandemic has shown that no member state can successfully combat such a civilisational challenge alone. We have to consolidate our forces. The reason why the vaccination campaign in Europe proved successful is that the European Commission has successfully provided the member states with vaccines.

This is remarkable in the medical world that in such a short time and among such a massive pandemic the vaccines have been developed so fast by a few companies, which helped to save people.

What makes me concerned, though, is the disproportion in the percentage of the vaccinated population in the member countries. This is even more worrying, given that another wave of the pandemic is approaching.

The EU’s leaders on vaccination are Malta, Denmark, which are relatively small countries, but also Portugal and Spain. The least vaccinated countries are Bulgaria, Romania and Croatia. The last nine places in the EU vaccination ranking are occupied by CEE countries. How could you explain this division between West and East when it comes to the pace of vaccination?

In vaccination, education has a key role. It is important that politicians convince the people that the vaccine is the only way to keep safe. For many groups, like elderly people or those suffering with chronic conditions jabs are the only way to survive the pandemic. Unfortunately, we observe anti-vax movements empowering. Some politicians, including some MEPs, say openly that they oppose vaccination, or they oppose those vaccinations which are mandatory.

Today, one-third of the Polish population aged 18 to 65 declare they would not get vaccinated. 27 per cent of respondents say that nothing could pursue them to change their approach to vaccination. What are the reasons for this unwillingness?

As I see it, the reason is that the ruling party in Poland is flirting with the anti-vax movements and this makes them hesitant to plainly recommend to the people to get vaccinated. It is not only politicians that are responsible for raising public awareness, though. Successful education requires cooperation between the central government, local governments and non-governmental organisations. Since this cooperation in Poland proves insufficient, Poland is dropping in the vaccination ranking. This is terribly worrying. The number of cases is again on the increase and another wave of the pandemic is inevitable. It would bring tragic results if we do not manage to vaccinate enough citizens.

You mentioned some politicians’ cooperation with anti-vax groups. How, in your opinion, this cooperation and anti-vaccination rhetoric can prove politically profitable?

Threatening people against the achievements of medicine is undignified of a politician. You cannot do such things. But many do. Unfortunately, we do observe such tendencies in many countries, also with COVID vaccines. This is a highly dangerous phenomenon. To my mind, politicians’ role is to convince people to knowledge, providing arguments for a safe life. Those who flirt with anti-vaxxers play with the citizens’ health and lives.

In recent weeks you travelled a lot all across Poland, talking to people also about vaccination. How do people in small municipalities approach the issue?

I spend every weekend on meetings with people in small towns and villages. Every time I ask at such meetings who is vaccinated. The next question that I ask is who has not been vaccinated. Then, I approach those people who raised their hands and I try to convince them to get jabbed. It often proves effective. There are usually vaccination centres at our meetings and a lot of people decide to get a jab.

People have a right for concerns, but politicians’ role is to convince them and tell them the truth. This is what I am doing. I had meetings in villages, like Słajsino or Przelewice in Zachodniopomorskie Voivodeship. At every meeting there were people who had concerns, but there were also people who got vaccinated during or after the meetings.

In your home municipality Resko over 45 per cent of people are fully vaccinated, while in Ustronie Morskie nearby, a municipality with a similar population, over 65 per cent of dwellers have already received two doses or a one-dose vaccine. How important is the role of the local governments in the vaccination campaign?

It is of profound importance. It is nice of you that you have checked the statistics for my hometown, where I was born. The share of the vaccinated population is still not satisfying. However, the differences between municipalities concerning vaccination should be levelled. The role of local politicians, of people who enjoy high authority among the locals, but also of the Church should be convincing people to vaccinate. This is a matter of survival.

The introduction in France of so-called COVID passports, which gives access, for instance, to culture-related services, proved effective. The percentage of people who have received at least one dose of the vaccine increased by over 20 per cent in two months. Is such indirect compelling to get vaccinated a good solution?

I say that any method that effectively leads to a rising number of vaccinated people is good. Yet, each country has its own specific. Therefore, I observe carefully the situation in France and the results of the authorities’ decision. At the same time, I participate in discussions in Poland.

Education, raising awareness and a “good spirit” around the vaccination campaign are absolutely crucial. The government’s ambiguous statements are counterproductive. People look at politicians and think that if they are doubtful about vaccination or do not want to get vaccinated, there must be something wrong about the vaccines. Using the argument of fear against vaccination for political benefit is reprehensible.

How do you see the media’s role in combating vaccine-related disinformation and promoting vaccination?

The media’s role is profound. You know it, I know it, it is known for everyone who deals with politics. The role of the media is to say the truth about vaccines and in most media this is indeed the case. I do not have in mind the public media, but the real media. It is necessary to tell people the truth, to show that those who got vaccinated are safe and are able to enjoy many public services again, while those not vaccinated risk a lot. Media have to encourage positive actions, but at the same time draw attention to the differences in the vaccination level that you mentioned.

Fortunately, most citizens have access to reliable information on vaccines. There are also numerous politicians who say the truth about health and vaccines, just like you do. Given this into account, why still so many people, both young and older, refuse to get vaccinated?

In the case of young people the most likely reason is blitheness. They think nothing can happen to them, who are young, strong and agile. This is a wrong conviction, though. Even I know young people who died from COVID. When it comes to the elderly population, fear is probably a partial reason, or the lack of knowledge about how the vaccine works.

Therefore it is everyone’s role – the role of politicians, non-governmental organisations, and the Church – to discard false information. People can have doubts. I always approach with respect the people who are doubtful about vaccination. If they are doubtful, we should help them to resolve their doubts. One should neither mock those people nor stigmatise them. It is crucial to help them to make the right decision.

How can the European Union contribute to a further increase of the vaccinated population and, at the same time, tackle the vaccine-related inequalities among the member states?

The European Union’s goal is and should be vaccinating 100 per cent of citizens who ought to be vaccinated. This is the real goal we should pursue. I am obviously content that we talk about 70 per cent of vaccinated people in the EU, but it is still too few.

Moreover, we have to prepare for the future. COVID has shown that civilisational challenges require cooperation. I think it would be good to reflect on the provisions in the Treaties that leave health issues in the hands of the member states. Both COVID and cancer reveal that without cooperation we are going to fail in this field. Consequently, I opt for the discussion on health in the European Parliament and the Commission.

The world is changing and some years ago nobody thought that a time might come, when one small virus, which is invisible to us, could keep millions of people home, force closing borders, and stop air transport. Politicians must be open-minded and adapt the provisions to the situation. I am a great proponent of making health our common, European issue. We should not leave health, which is a key area for the EU citizens, only in the competencies of the member states, because in a wide-scale pandemic separate countries are defenceless.

Do you back the idea of vaccinating people with the third dose of the jab, while so many people in Europe remain unvaccinated and so many citizens of the less affluent countries are still waiting for their first dose?

This is not about my personal opinion. Every day I read with great attention the Polish, European and world’s experts’ opinions. If the experts consider it to be a right step that the people with lower immunity or chronically ill should receive a third dose, I trust them. On the other hand, Europe, as civilisationally developed community, must seek ways to support those non-European countries who has a hindered access to vaccines. Still, European Commission responds for the safety, including health safety, of the European citizens and should it prove necessary to also provide other social groups with a third dose of the jab, it will be done.